"The House with a Clock in its Walls": News | Reviews | Discussion 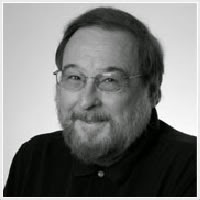 Brad Strickland (b. 1947) is the author or co-author of over 60 novels and over 60 pieces of short fiction and poetry.

His first novel was 1986's To Stand Beneath the Sun, followed quickly by the books in the Jeremy Moon trilogy.

Strickland has shared co-author credit on many of his books: with his wife, Barbara, on stories in the Star Trek and Are You Afraid of the Dark? properties; and with the late author Thomas Fuller, books in the Wishbone series, involving the popular Jack Russell Terrier from the Public Television series of the same name. Strickland and Fuller also collaborated on numerous original works, including the Pirate Hunter series, the Mars: Year One series, and the comedic mystery for adults, The Ghost Finds a Body.

After the death of John Bellairs, Strickland was approached by John’s son, Frank, to complete the two books his father had already started; these unfinished manuscripts became The Ghost in the Mirror and The Vengeance of the Witch-Finder. Strickland also wrote two books based on brief plot outlines left by Bellairs: The Drum, the Doll, and the Zombie and The Doom of the Haunted Opera. Beginning in 1996, Strickland has kept Bellairs' legacy alive by writing the further adventures of Johnny Dixon and Lewis Barnavelt. Books in the corpus include The Hand of the Necromancer (1996); The Tower at the End of the World (2001); The House Where Nobody Lived (2006); and his most recent title, The Sign of the Sinister Sorcerer (2008).

In 2001, Strickland won received the Georgia Author of the Year Award, Children's/Young Adult Division, for When Mack Came Back, set in WWII-era Georgia. Strickland says the story "is based on the farm owned by [his] grandfather, where [I] often visited when [I] was a child." Kong: King of Skull Island was released in 2005, an illustrated tale by Strickland, author John Michlig, and fantasy artist Joe DeVito that serves as both a prequel and sequel to the epic story of the legendary ape.

Strickland is an active member of the Atlanta Radio Theatre Company, where he writes and performs in numerous audio drama projects. He was awarded the ARTC Lifetime Achievement Award in 2006. He is married to the former Barabara Justus and has two grown children.