"The House with a Clock in its Walls": News | Reviews | Discussion

1950’s New England Is A Fun Place To Visit With Bellairs As A Guide...[a] Master At Creating A Creepy Atmosphere 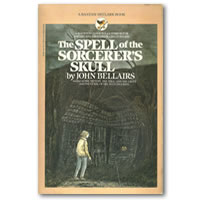 This is a re-read for me. I adored John Bellairs’s books as a child, even though many of them scared the pants off me. Although written in the 1970’s and 80’s, Bellairs’s books are set in the 1950’s, during the time when he grew up.

The Spell of the Sorcerer’s Skull features Johnny Dixon, the hero of eight of Bellairs’s books. Johnny is a rather nice boy, timid, a worrier, but a loyal friend, and brave when the occasion demands it. He lived in the small Massachusetts town of Duston Heights with his grandparents, who took him in after his mother died (his father is in the Air Force, having served in the Korean War and re-enlisted afterwards.)

Johnny is good friends with Professor Childermass, a cranky but kindly man who lives across the street. On a trip to New Hampshire, there’s a weird occurrence at an inn, involving a Childermass family clock. When Professor Childremass goes missing a few weeks later, Johnny is convinced that his sinister disappearance is somehow connected to the clock.

Interestingly, I’d forgotten how heavily religion played a part in some of Bellairs’s books, particularly the Johnny Dixon books. Like Bellairs himself, Johnny is Catholic, and since he suspects that the Professor’s disappearance was somehow caused by black magic, he turns to Father Higgins, a priest he feels he can trust.

Instead of magic as an innate ability, with the importance placed on what’s done with the power being wielded, we get magic as a way of twisting nature to achieve selfish and sinister ends. Which I suppose is the difference between fantasy and horror, as genres—in the former, the supernatural is awe-inspiring, while in the latter, it’s just terrifying.

As a book written for 8-year-olds, it isn’t surprising that The Spell of the Sorcerer’s Skull didn’t scare me like it did the first time I read it. I was entertained, though. 1950’s New England is a fun place to visit with Bellairs as a guide, and he’s past master at creating a creepy atmosphere.

Email ThisBlogThis!Share to TwitterShare to FacebookShare to Pinterest
review of: spell of the sorcerer's skull